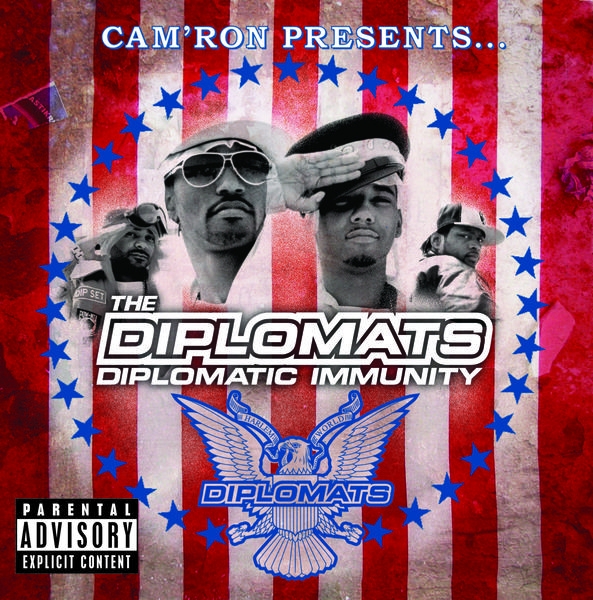 On March 25th of 2003 The Rap Game took a very interesting turn and a very solid impact was made on the game…That impact was Cam’ron, Juelz Santana, Jim Jones and Freeky Zeeky known collectively as “The Diplomats”. There Double CD Diplomatic Immunity was not only a game changer but it also brought some things to the game that till the day are imitated but not duplicated.

Cam’ron – You can always find a group of people who are willing to go IN on Cam and his choice of lyrics but whether its the “Big Yellow Stones The Color of Piss” or Pink jackets and Range Rovers he made his mark and put his team on and set them up for ultimate success and in doing so created one of the strongest and most elaborate regimes in hip-hop history…Without Ma$e.

What’s Really Good?…The Dips put that phrase on the map…All these “Gangs” [Musical Gangs to clarify] must pay hommage to the Byrd Gang..I honestly don’t remember a team recognizing them as such before Dipset..Its been Clans, Soliders, Army, Clicks, Brothers and La Familia’s …but for the life of me I can’t tell you of one gang before this album

Without Diplomatic Immunity there are no Heatmakerz. Not saying this is the ONLY thing they ever done but, Dipset and Heatmakerz were hand in hand into making what some would deem this Classic Project. Not to mention the Heatmakerz sound would take over the industry for about 3-5 years even when The Dips moved on.

We all knew Juelz Santana from “Oh Boy, Hey Ma and the Come Home With Me” Album in 2001…but Diplomatic Immunity made Santana one of the most anticipated and emulated artist of recent memory. Whether it was “A!” The way cats was rocking bandanas or the emotional, loud aggressive flow…Juelz Santana make his permanent mark before his solo album debut.

Jim Jones, Freeky Zeeky, Uncasa, Hell Rell, J.R Writer and 40 Call would all get there start because of their contribution or cause of the steam of this album.

Did Dipset reign forever? NO. Hell they even fell apart at the core and had the fans wondering is it real beef amongst the team. Were a gang of multi-platinum careers started from this? No. To a degree some can say that only Jim Jones exceeded expectations in a world of “Planned vs Actual”…that’s saying a lot.

What Diplomatic Immunity did do was provide a time capsule of the solid change that took place in New Millenium Hip-Hop. They didn’t move the most units, have the biggest hits or become the biggest stars but, like it or not they changed the sound and the culture…and for that…I salute the Diplomats and congratulate them on making a project that is still streets approved 10 years later.

Really think about the year 2003 and the major players in place…Get Rich or Die Trying is platinum plus and In The Club is in Every Rotation with G-Unit set to have a phenomenal year! Then you have Jay being Jay, Nelly playing over into the year and Murder Inc was still in a power position…this Album still means something at that time…its a bigger feat that most won’t give proper credit for.