Jay Z told us a while back “It’s funny how 1 verse and F up the game” and once again he is right! 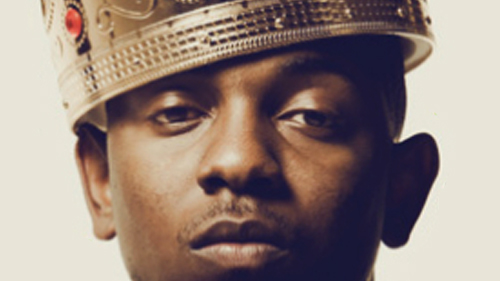 The hip-hop world is a stand still as Kendrick Lamar as made a claim that he is taking down all his peers in an effort to be HANDS DOWN! The Best Emcee out!  Check out these bars 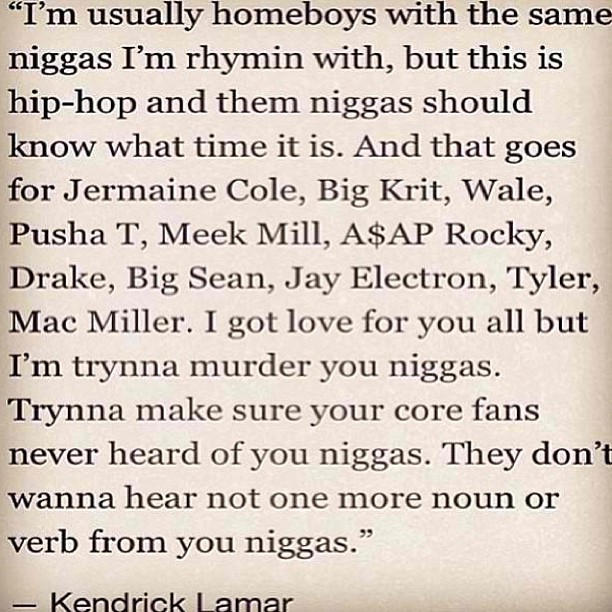 First things first…THIS VERSE IS PHENOMENAL and not just because of the end. I think what makes it great is that Big Sean came so hard that Kendrick had to go as  hard as he did or else he was putting himself at number 2 of the new crop of emcees that he mentioned and rhymed with.

For those who think “So what”. I understand. For about 13 years now when a rapper called out a group of rappers its usually “THIS WEAK A$$, BI**H A$$ N***A AINT NEVER IN THE STREETS!” “I’LL KILL YOU WHEN I SEE YOU!” I’LL END YOUR CAREER! I HOPE YOU DIE” and any other expletives and down right disrespectful things you can say to another human being over an 808. You are used to “Rap Beef”, theatrics, WWE ish…This ain’t that. Kendrick is keeping it music and letting other rappers know “I’M THE BEST” “We cool, but on this mic, you’re 2nd best”. If you take pride in your music. You should feel a certain way. Not to the point of violence but you should want to show Kendrick that he got the game wrong.

For those who think this is a major blow to the game. I understand. Honestly the last time I heard a rapper rap about being the best. I want to say it was on The Eminem show. FINALLY we are in a position to have “The Hottest Rapper” being “The Best Rapper” and he wants to compete with other rappers. Hip-hop over the last decade was has either seen detrimental violence or too buddy buddy for their own good.  We spent year of hearing guys and girls move units under the act of  “I’m Not A Rapper”, I’m a gangsta, hustler, etc who just knows how to rap”. We have spend years of the Emcee being disrespected, discredited and being made so lame yet easy and finally someone has taken a step forward in putting a stop to it!

Kendrick said he the King of New York…LOL! What y’all NY Rappers going to do about it? I want to see this! Everybody been asking for NY Hip-Hop and we just heard it’s from Compton by way of Chicago.

You know who should be offended? Everybody he DIDN’T Mention. Even Jigga gave the rest of the game half a bar. Who’s going to step they bars up for the “Don’t forget about me” purpose? Who’s going to pen some GREATNESS not that Kendrick has staked his claim as King of The Lyrical Jungle?

You know who else should offended…Jay Electronica…You heard his verse…SMH. He’s not even needed on the track after Kendrick but even after Sean he is taking a MAJOR L!

End of day. This is hip-hop. Kendrick thinks he’s the best doing it and he wants to prove it against YOUR Favorite rapper. There is absolutely no crime in that. If more rappers thought like Kendrick then you wouldn’t have an abundance of fans listening to 15 year old albums, missing the 90’s and literally ishing on the future of hip-hop. [Pun Intended]. I salute Kendrick and hope this indeed sparks change!

If you haven’t heard it….Listen to the lightning rod verse of 2013