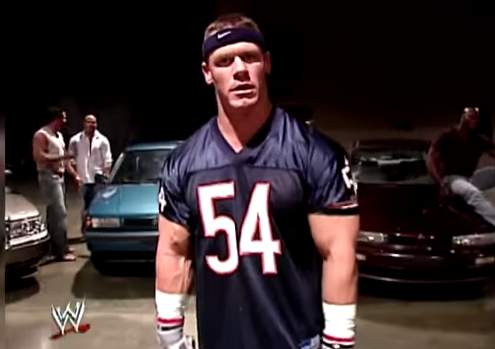 In my humble opinion, the best representation of hip-hop culture in Wrestling EVER was the Ruthless Aggression period that birthed the Dr. of Thuganomics John Cena.

Some felt it was Cena being a knockoff Marky Mark because of the similarities. After all, Cena is a cut up, white dude from Boston that’s rapping. [West Newbury more specifically] However, I think it was much greater than that. To me Cena’s character was just proof that hip-hop culture was taking over the WORLD and it was extremely popular amongst a predominantly white audience.

John Cena came out in Throwback Jerseys, Baggy Jean shorts and Jordans, representing where he from and could not wait to kick a freestyle about one of his opponents. He wasn’t trying to be too down or extremely hood and if you look at the time period in which the character was created, he was extremely on point with what was going on at the time. People don’t want to admit it publicly but, Cena! Had! BARS! Cena really had me watching Smackdown like “wait…I got to run that back”. Sure it’s was up against other wrestlers that couldn’t rap but, we see “The tallest midget effect” from dudes really trying to have rap careers  everyday and they don’t sound as good as Cena did if we are being honest.

By the way, those similarities to Cena’s Chain Gang and 50 Cent’s G-Unit were no coincidence. Remember WWE Headquarters are in Connecticut much like 50 Cents House was and in 2003-2004 they were both two of the biggest names moving at the time.

I’ll admit, had this been a black character, I probably wouldn’t like it. R-Truth is just not that dude to me  [Walking Negrocide to put it light] and who really cares about or remembers Cryme Tyme [Two Black dudes from Brooklyn that steal and say “YO” 50 times before they complete a sentence…SMH] ? I don’t know why a lot of black wrestlers feel the need to “OVER BLACK” being black. Have they learned nothing from Ron Simmons and The Rock?

So salute to the Dr. of Thuganomics John Cena! Although you are this generations Hulk Hogan now, you represented hip-hop culture in a real way!


Make sure you get on WWE.com and subscribe to the WWE Network! WWE Payback is tonight!