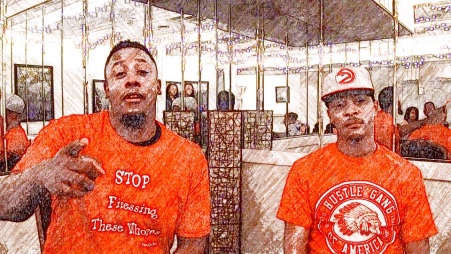 Very rarely do you get a chance to talk with one of your favorite artist and entertainers. I can tell you that as soon as the station made the announcement that T.I was stopping through Indianapolis, I was on the hunt to lock down an interview with the King.

I didn’t get much time but, what I can tell you is T.I’s new album titled “Paperwork” is due to release September 2014 and is supposed to be album one of a 3 part series. It’s Executive Produced by Pharrell and T.I says that “It is the first T.I style album since Paper Trail”.

PERSONAL ASSESSMENT:  Part of me really didn’t want to post this interview. At the time it wrapped I thought, this is terrible! I can’t even use this. After a playback I thought, well it wasn’t as bad as I felt. This was a valuable learning experience.

I understand him not wanting to answer the lyric question. I didn’t clarify that I didn’t need names, I just wanted the situation. However, I do think he knows exactly what his 3 favorite project are from his catalog. I was hoping I got the T.I I saw on the Troubleman Promo run. The guy that was high energy, taking on any question and quick to let people know he’s been off probation. I will say I don’t think it’s personal at all. Check out his Breakfast Club interview and others from this year and tell me what you think.

Maybe he was expecting a Tiny/Mayweather question. She was also in the room but in all honesty, I don’t care about that. That type of content is not what BehindTheRhyme.com is about. I even seen the Floyd video after my interview and said “Oh! Maybe he was expecting me to go there”. T.I’s weathered a lot of storms and it appears he’s waiting on the current one to pass.

All in all, I’m my own worst critic and I appreciate everyone that has reached out to tell me that I’m tripping because this is a good interview. Thank You All!