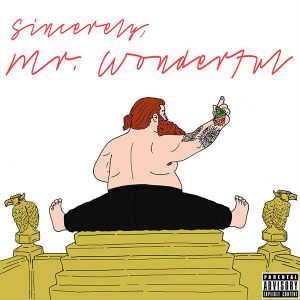 My favorite “New Rapper” is Action Bronson. We rarely get an artist that just doesn’t care and lives out loud to this degree. When I say that, I mean it at an early Busta Rhymes level or an Ol’ Dirty Bastard in his prime or even a Ludacris. They all made hip-hop extremely entertaining at one point and put out dope music in the process. Action Bronson is doing that right now. “Mr. Wonderful” is a dope project. He does veer off into some “non-hip-hop moments”, but it doesn’t diminish the projects value.

Nobody should talk on a track if they are not talking like Big Body Bes aka Big F**king Body! This guy is hilarious, but at the same time, I believe every single word he saying. He’s a track enhancer in his own way. “I get fresh to fight” is just an unforgettable line that you can’t help but remember. I want to hear a Bronson and Bes track forever.

I also like that Bronson is not afraid to show he’s a fan of different artist and music that is not hip-hop. It’s honestly why his sound stands out. While a lot of rappers are chasing the current hot rapper or Pac, Bronson is just doing him and creating something x-factor yet a great representation of hip-hop at it’s core.

Bronson’s rhymes are imaginative, colorful and honest. He’s also just doing creative different music. He’s an artist that embodies the foundation of hip-hop. You can’t speak bad on Bronson, because Bronson is the type of artist the culture was meant to inspire. Listen to this Mr. Wonderful album. Action Bronson is another reason why overall I say the best hip-hop music borough is Queens, New York.