It’s been about 2 months since the release of T.I’s “US or Else” EP and he has firmly stood on every bar that is spit on that project in real life. The expected disappointing part of this is, the mainstream media outlets that spare no time in reporting his gun charges, arrest and prisons stints are seemingly ignoring the great content that he has put forth this year. That keeps the people unaware of his positivity.

The Black Lives Matter Movement is becoming the spark of a modern day Civil Rights Movement and it appears that T.I wants to be at the forefront of that movement. He’s not only holding his own feet to the fire, but he has recently held two of the biggest figures Black America has, in Floyd Mayweather and friend Lil Wayne for their All Lives Matter comments. 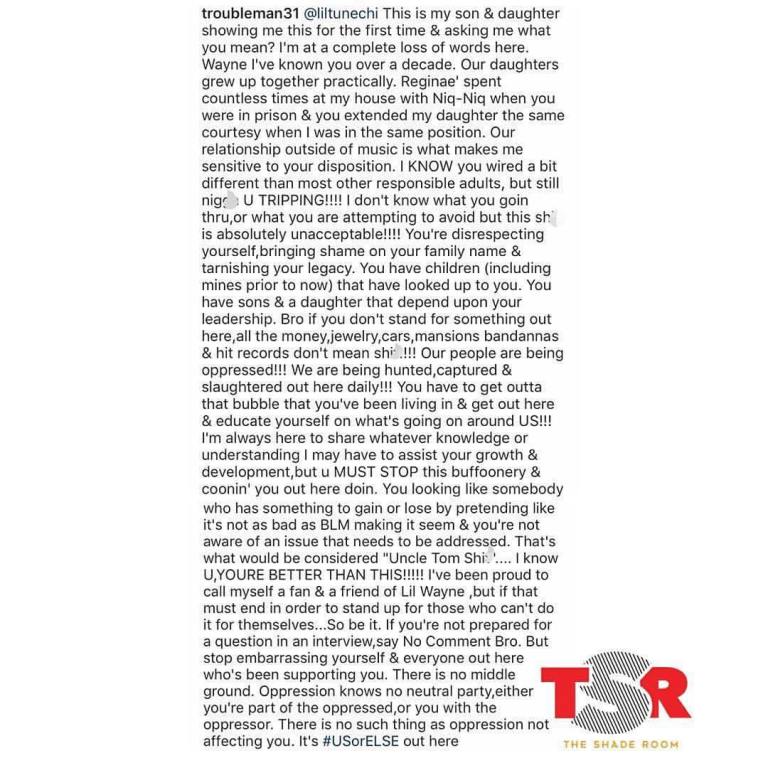 We’ve always had Killer Mike, David Banner, Chuck D and Dead Prez and it’s always been accepted and appreciated, but T.I taking a powerful stand and backing it up with music and action is huge for the cause and awareness to Black Lives and exactly why they matter in the U.S.

T.I is a multiple time felon, with publicized beef, convictions and turmoil that has 180’ed into somewhat of a Hip-Hop/Black American Activist after what he has watched transpire over the last couple years. The killing of unarmed black men, the election season and the events that have done everything but uplift and respect black culture and its people have officially gotten Tip’s undivided attention. With that attention he’s been about nothing but action. Genuine care has caused the spark that could change things forever if we help keep the fire burning.

Why is it a big deal for Tip to care?
T.I is one of the very few artist that appeal to the “Golden Era OG’s” yet can still grasp the attention span of the young people of today. He has sold over 10 million records and has some of the biggest hit rap records of the last 15 years. He’s seen the good and the bad and has survived insurmountable odds to be where he is today. We are in the process of witnessing what a voice with that magnitude can do when it cares about the people and drawing a line to see where everyone stands whether friend or foe.

The flip of all this is, the hip-hop community has to support BLM T.I like we did Trap Muzik T.I. We loved when T.I had the dope and the choppers and was getting a room on the other side of town. Now, we got to show the same love when he talks about the feared black man and how the police are on a hunt for us and how the system is designed to keep us “less than”. Not only is this the content many of you have been begging for, but it’s coming from a person who really would know something about it and can cause real change musically if he’s supported. T.I can speak accurately and in first person about what it is to be a young drug dealer, a rap star, a targeted black entertainer and why and how systemic oppression exist. He’s lived it. The big thing in hip-hop is keeping it real right? What is realer than that in 2016?

Hip-Hop and Black Delegation. We got what we wanted. We got one of our most respected and important figures in the culture to take a stand and “say something”. Now, we have to do our part and support that “something” and keep them on the radar and on the charts so an even bigger change can occur. Lets focus on getting our culture united and raising our level of respect.

One thought on “Tip: The Right Voice At The Right Time #USorElse”