4 days into the new year and we have already seen top shelf ignorance from 2 of the biggest stars of the last decade. Yes, Soulja Boy is a star whether you buy his music or not. 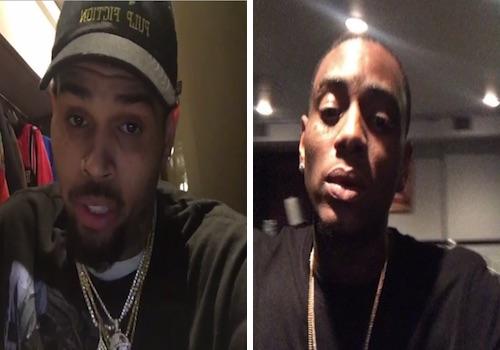 Bhris Brown vs Big Soulja is not a hilarious as it should be because it is honestly a small piece of a bigger issue. That issue is out of state artist that move to Los Angeles and make friends in “Bompton” so they can achieve the “rank” of “Superstar Gangster” on social media. Now we all know it’s tough guys everywhere, but in the industry the breakdown is this.

What is Financial Flagging? I’m glad you asked. Financial Flagging is when young and sometimes not so young entertainers find out that gang members either want to be their friends or extort them. They then pay for the friendship or protection for said gang or opposing gang, to feel save as well as have an “entourage or killers” and feel safe because of their new affiliation with the gang.

Why is this out of control? Because young pop stars, actors, athletes and rappers now engage in “beef” online and put everything “On Something” and calling “Big Homeys” by name [which can’t be a good thing] and are “ready for action” on site, whenever there is a problem and usually the “problem” is “I didn’t like your tweet or comment” based. All of us with street common sense know that entertainers “getting into some gangsta ish” isn’t realistic.

Why is it not realistic? Because every “beef” we’ve seen can be solved with a “Charity Boxing Event”. “Bhris Brown” vs “Big Soulja” turned into promo for Adrien Broner’s gym.

How many gangbangers are having organized street fights in gyms? Feel free to answer in the comments

It must really be hard to be young, rich, black and not wanting people to think you’re not a sucka. I know nothing about that life, but I doubt these young men along with Sean Kingston, Tyga, Meek Mill, Justin Bieber or any of the other young stars we have been seeing over the last 5 years are handling this correctly.

How Kendrick Lamar come from the hoods y’all visit and got more chill than the Financial Flaggers? We all know the answer so here is my plea.

I want all the true Big Homey’s in LA, Compton/Bompton and The Bay to start regulating all the industry nonsense. We all know this craziness is just going to get some young person seriously hurt or killed and absolutely nobody wants that.

So Snoop, E-40, DJ Quik, Too Short, Nipsey, Dom Kennedy, Jay Rock, ScHoolboy Q, Y.G, and The Game on a peaceful day; Talk to these young boys and let them know they have no business getting themselves into that “Set Life”. Let them know they not even in gangs for real. That they just making gang-banging famous and that kind of fame comes with the price of life. Let them know, they can’t do it like you, cause they’re not you and being themselves is the real route to go.

If that doesn’t work; Tell these young boys to go home and help their communities before they get themselves killed out here.

Hip-Hop: The culture that was built with what you had both inside you and around you. Let’s never forget that. Let’s be about love and individuality this year.

Gangbanging is not for anyone over the age of 25 and even 25 is pushing it.