Retro’s and “Taking it back” to a time when you were either a toddler or weren’t even born has always been a thing. Present day, everyone is obsessed with bringing back box fades, Jordan’s and skinny jeans if we’re being real.

On this day in 1997, a very dope tandem came together to take it back to the 70’s theme with a very 90’s NY sound. It was the Sonny Cheeba and Geechi Suede as the rap group, Camp Lo, with there time capsule jewel called Uptown Saturday Night. 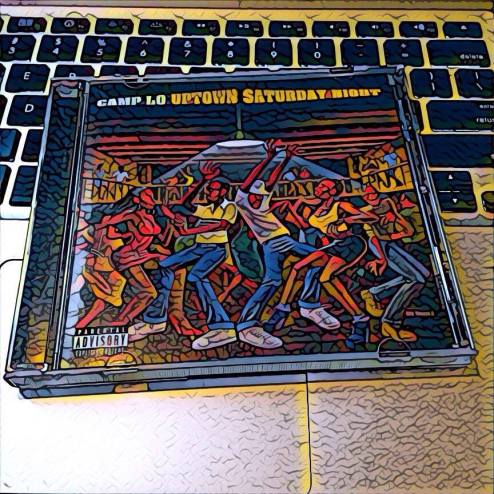 Uptown Saturday Night the movie was originally a classic 70’s movie that starred Bill Cosby and Sydney Poitier. The plot is two men on the quest for a lottery ticket that gets lost in the shuffle of a crime. Uptown Saturday Night the album is two guys from NY with a banger called Luchini aka This Is It, which is still a “get money anthem” that still plays today and gets the crowd going. The video had a 70’s fashion theme as Geechi and Cheeba donned mailboy hats and leisure suits in a diner. At the same time the video cuts to a heist taking place. A heist that Camp Lo is committing.

Although this setup is pretty dope, the album itself doesn’t truly carry a story theme. The videos though; Dope!

I remember the first single they dropped, Coolie High. I’ll be honest, I wasn’t a fan. I remember them doing the Soul Train line in the video and I immediately just assumed “this ain’t for me” and didn’t think of checking for the album. In 1997, it was just a tad too chill for me at the time. You got to think; Big, Pac, Nas, Busta, Mobb Deep, Snoop, Wu and many others had already set the tone of aggressive rap music that wasn’t as chill. So when this came out, it moved too slow for me. However, it was a pretty decent track.

It wasn’t long before Kevin and JJ would be singing the Luchini joint and I would began liking the song. My love, was for the B-Side record though. Swing with ISH of Digable Planets sent my hip-hop emotions in a whirlwind! A lot of times BET would cut off the ending of videos so I wouldn’t always hear the end, but the moment I saw the end, I said “AYE! That’s dude from Digable Planets!” That song at the end bumpin! I had only heard 4 bars, the hook and the beat, but I was on my way to Ear Wax to cop the Luchini single for the B-Side.

I cop and play the B-Side first. I still love that joint. Much love to Luchini because it is a classic, but Swing sold me on liking both songs, but I still didn’t buy the album. Then they dropped “Black Nostaljack“. The video is a Good Times episode

That joint was cool, but again, I heard the B-Side Krystal Karrington and Oh My God! I needed that song too! That beat is so hard and infectious that I began thinking this Camp Lo album may be worth buying.

I’ll be honest here. I don’t think I bought the album in 1997. In fact, unlike most albums I don’t remember where I was or what store I went to get it. Part of me thinks I may have just copped the entire album 12 years ago, although it’s 20 years old. What I can tell you is when I copped the album I was very pleased with the purchase. The album is full of smooth grooves and hard head nods. Suede and Cheeba were great compliments to each other and they have great flows. They even have a few slick bars for you in the midst of the flows.

Krystal Karrington kicks off the album then it goes right into Luchini. Then, it’s Park Joint and you may start to think, “Damn! I slept on the greatest group album of 1997”. That’s how hard the first 3 tracks on this album are. Then you add joints like Sparkle, Black Connection and Swing and you have 6 out of 15 joints worthy of your ears. De La Soul is on the album in “Stakes Is High” mode on B-Side To Hollywood and don’t forget Black Nostaljack and Coolie High. If you don’t like at least half this album. You probably don’t really like hip-hop.

Is this album a classic? No. There is a classic song on it though. I am still the only person I know who has a hard copy of this album. Camp Lo is more of a testament of how hard it was to make it to the TV, Radio and The racks in the 90’s. The album doesn’t have mind blowing bars for the time and really, it came along at a time where just flat out better artist were starting to win big. I also think they could have ran with the 70’s theme more on the album. Camp Lo in this era could thrive and do 5-10,000 seat venues across the U.S and have a cult following that would ride or die for them.

I heard Camp Lo is working on new material. I want to hear that material. I think there style is a great alternative to today’s wave. Salute to Camp Lo and their 1 and done album “Uptown Saturday Night” if we are being honest, we all slept.