On March 9, 1997 hip-hop lost what was deemed as its greatest current asset. The Notorious B.I.G was gunned down in L.A. After losing Pac just a few months before, nothing in hip-hop really mattered beyond the mourning and the music of the two rap giants.

As I was registering the news while walking home. I burst into tears. It was a bright sunny day and I’m walking up Ottawa street, crying. I didn’t really know why. Looking back, this was probably one of those moments that showed how much I loved hip-hop. I didn’t know Biggie personally. I have no relation to anyone named Wallace. I’m not from Brooklyn. So, I understand why on the surface it made no sense for me to be “crying over a dead rapper”. However, when your life starts playing back memories. The emotions and the people become so real.

I remembered memorizing all my favorite songs from Ready To Die while playing NBA Live. I remembered Biggie’s Players Anthem verse being my favorite of the year. I remember the anticipation of my cousin Corey, Antoine and myself as we drove to see Biggie perform at The Metro Centre in Rockford. Even my mom liked Biggies music. She wouldn’t listen to it with me. Even tried to stop me from listening to it because of the content. But she like me couldn’t deny that he had something special.

With his death confirmed, all we had left was the album to anticipate. It was like the note left from your favorite family member that you knew you wouldn’t see again. It was like when Pernell told Caine to look after his son. It’s real sad and its real tears, but you know you got to keep moving and enjoy life as it has to be moving forward. The album would be B.I.G’s last words to hip-hop. I needed those words. Life After Death is everything he could possibly say.

I remember when the “Hypnotized” video premiered. The one comment that will always stick out to me after seeing it, is my guy Walter’s when he said “Man, y’all see that new Biggie video? Messed up he not here. He was bout to change the game for real…Dang”. Although I wasn’t the biggest fan of the song, he was right. It was 1997 and Biggie and Puff were in fast luxury cars riding backwards on the highway. They were on yachts throwing money while being surveillance by helicopters. They had women as mermaids in an aquarium in the house! Son! You never seen that before ever in hip-hop! That video in hindsight of the times was amazing!

March 25,1997 finally came and  the album dropped. I don’t think I ever anticipated an album dropping before this one. My guy Antoine had it first so he came through the crib and played it. It was literally an event. We listen to music differently, so he was actually making me mad not letting all the songs play, lol. He played a few snippets, but went right to “What’s Beef”. As soon as we heard the violins, we blew a gasket! It sounded so beautiful. You can’t help but fall in love with the sound and then mourn at the fact that we will never see the Commission. After hearing “What’s Beef” and parts of other songs. It was confirmed I needed Biggie’s final album. I can’t believe my mans “Tower Records” me though, lol.

I listen to every second of an album. I’ve always been that way. The cinematic approach in the beginning that leads in to “Somebody’s Got To Die” gives me chills to this day. Then the album is a rollercoaster ride of the life of a 25-year-old man who felt he wasn’t going to be anything and ended up being the number 1 emcee of the 90’s. 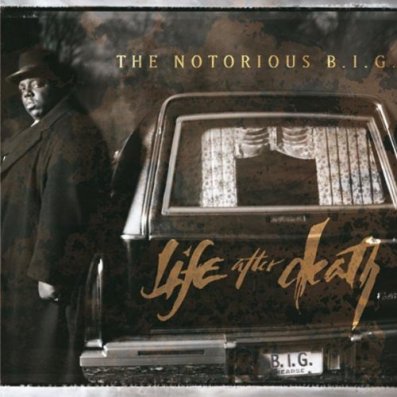 Sex, Drugs, Violence, Beefs, Bars, Hate, Envy, Lust, Love, Success. You get a great double album about all that with Life After Death. The storytelling on this album solidified Big with Slick Rick, Pac and Nas. The lyrics on this album put him with or passed Nas, Rakim and Kane. The flows; Unmatched. I can’t point to another album in 1997 where so many different ways to ride beats and use flows that were dope. “I Got A Story to Tell”, “Notorious Thugs”, “Mo Money Mo Problems”,”Kick In The Door”, “My Downfall”, “Last Days”, “You’re Nobody Till Somebody Kills You”. All these songs are unique to each other for one reason or another. It’s uncanny how great Biggie got in such a short time. He was already dope. The progression from Ready To Die to Life After Death is unreal!

The album is an unquestioned classic and not because Biggie died.

L.A.D is hands down the most “borrowed from” album in hip-hop history. Titles, sample, beats, bars, even videos. The entire hip-hop industry on all coast and in between have taken from this album.

For many this was the first time you heard The L.O.X. This album sets us up for Ma$e and Harlem World. This is also the soft introduction of Puff Daddy the rapper. All those things have impacted the culture of hip-hop and rap music forever.

Jay-Z has one of his biggest songs ever because of “The World Is Filled…” “Mo Money Mo Problems” is easily in the top 3 of overused hip-hop phrases, even if you’re broke. Life After Death is the pivotal album that made everyone say, “We have to increase versatility and have something for everybody.” These are just the cultural impact facts.

If there is a list of 50 albums every person needs to really know about rap music. Life After Death is on that list. Again I’ll say; This album is why I don’t call every body of work with 6 or more “hot songs” on it classic. This album was more than about “rapping good” and “having dope beats”. This album inspired your favorite rappers and birthed a fleet of new great ones. How many albums can you safely say that about?

Rest Peacefully Big. You changed the game forever. You will always be the Number 1 Emcee of the 90’s. Love.

Be Safe. Be Humble. Live Hip-Hop