On June 17, 1997 one of the greatest tandems in hip-hop history dropped their debut album. That album was The War Report. This album was the start of some things and the solidifying of others. New York was officially grimier than ever and CNN [Capone N Noreaga] added to that in great fashion. 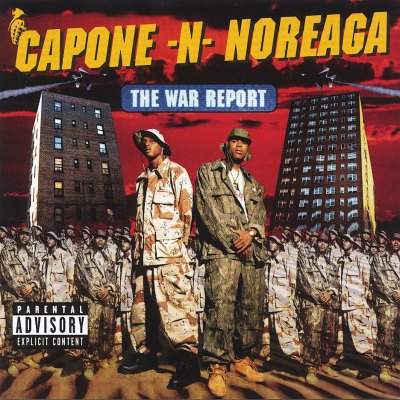 When I seen the T.O.N.Y video on Rap City, I knew I wanted to at least cop the CNN maxie single. It was super hard and I’m just a fan of violent east coast music. It truly never gets old to my ears. My guy Antione and I would hop in the red beretta and rock out to this joint and he would hit every block in The Port with T.O.N.Y on repeat.

What I got when I copped the album still lives with me to this day. I love this album! It’s cinematic, unpolished and rugged. Everybody on this album gave 0 f**ks about anything because it was make this rap ish happen or bust and you can feel that on every track. The wild thing about this album is Capone goes to prison before this album completes and NORE has to finish it without him. I don’t think that’s ever happened before on any album. At least not before this particular album. I think we get “Closer”, “Blood Money” and “Live On Live Long” because that happens. All are great highlights on the album in spite of the unfortunate circumstance.

20 years later and I’m still in search of the verse Busta Rhymes definitely has on “Driver Seat”. I keep hearing it’s on YouTube, but still no real luck. “Parole Violators” is still superb and my favorite song on this album, even though in 2017 Tragedy Khadafi’s verse would get him vilified by the court of public opinion forever. I still want to rap over the intro beat, since nobody else did and “Live On Live Long” is an unsung classic street anthem.

As far as first go; “LA LA” is definitely the first direct East Coast response to “NY NY” or the west coast in general. I don’t believe “Phone Time” was ever recorded and put on an album before “Capone Phone Home”. This was definitely where NORE started “What What” before making it a hip-hop staple.

I love this album so much, that I won’t debate people who claim it to be classic or not. At full transparency CNN and Mobb Deep videos are why I started copping army fatigue suits and still will rock one today. This album strengthens the Queens movement that Nas started. This album is to be appreciated and respected. You won’t hear anything like this ever again. Salute to Capone N Noreaga and The War Report album. It truly made me the hip-hop fan I am today.

BE SAFE. BE HUMBLE. LIVE HIP-HOP.