Now that I got that out of the way, let me speak freely….

One thing that I absolutely loathe and specifically in hip-hop conversations are the “hip-hop purist and elitist” who rant, rave and scream on gimmicks and how they have no place in hip-hop. That’s just a nonsensical thing to say. After today I want them to realize how much sense that doesn’t make and to prove not only that gimmicks are a huge part of hip-hop, it’s why rappers even exist in the culture of hip-hop as well as the mainstream.

Given the definition that I pulled from Wikipedia, every rapper who has had any sort of mainstream success and every rapper that has failed has had a “gimmick”. I know some of you have ran to “Urban Dictionary” to try and refute the context of how I am using the English language right now. Go head and please, leave what the Urban Dictionary says in the comments. I’d appreciate. it.

You probably don’t want to believe it but, Grandmaster Flash and The Furious Five had a gimmick. They looked like a Faction in the AWA [Pro Wrestling Reference]. They could have feuded with the Fabulous Freebirds and the The Rock and Roll Express if they wanted to but, because you like the music, they don’t count as rappers with a gimmick. 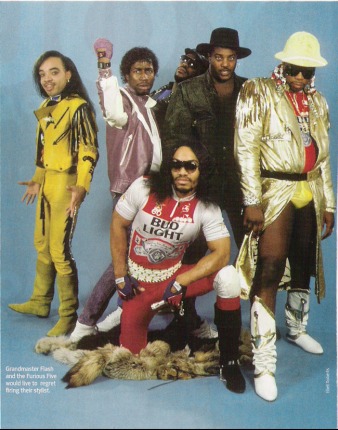 Now, did they do this just for photo ops and show performances? Yes, I don’t recall them in any interview saying that they walked the streets like this. However, they never have denied that they dressed a certain way to get the attention of the masses and stand out amongst the other hip-hop crews at the time. Remember, they came up in the era of The Bar Kays, The Gap Band, Sly & The family stone. Rap Music and it’s artist had to blueprint when they started so, those were the cats they looked up to.

Run DMC [R.I.P JMJ] also had a gimmick. Thank Russell Simmons. Russell said that JMJ’s regular look stood out and if RUN DMC was going to work as a group, they should all dress like Jammaster Jay. At the time nobody doing hip-hop music was dressing quite like them. The music also had rock influence which was the most popular genre to a mainstream audience at the time and they infused it with their sound [Thanks To Rick Rubin] and BAM! Hip-Hop Legends are Born! Once again, you don’t consider it a gimmick because you like it. That’s not the way things go. Run DMC is also in the Rock N Roll Hall of Fame by the way.

Now, lets go to the obvious gimmicks that people swear they hate like MC Hammer and Vanilla Ice. Dancing with parachute pants and loafers on is no different from Busta Rhymes spazzing out in what appears to be a Circus Ringmaster Hat and a Bubble jacket that looks like your favorite childhood Beanbag chair. By the way, How did Busta Rhymes “BUSHI” clothing line do? Cause you know you had the opportunity to dress like Busta Rhymes if you wanted to, right? I LOVE Busta Rhymes before The Big Bang Album. I don’t like Dark Cesar adult Busta. I like wild, crazy, colorful Busta Rhymes.

LL Cool J’s Kangol, Slick Rick’s gaudy jewels and eye patch [although he really does need the eyepatch] over to Ghostface Killah and his Robe’s and “Wonder Woman Arm” with the Eagle on it, Puff Daddy and his shiny suits, Eminem’s blonde hair and blue eyes and even down to Young Jeezy and the Snowman craze….ALL GIMMICKS! These were all things that stood out about each artist whether you loved it or hated it and whether it stayed or not temporarily it sold because people bought into it. That’s what rappers are here to do. SELL! MARKET! BE REMEMBERED! What don’t y’all get about this?

What’s the difference between Trinidad James and Andre 3000? Your answer is lyrical content and a dentist. Outkast even address this on The Aquemini album. Yeah, overall it’s all love for 3 Stacks now but, when he was wearing football pads and psychedelic chaps or Down Feather Draws with matching white hair, he was called “weirdo, crackhead and homosexual”. The Aquemini album went Diamond [10 Million plus sold] Thats a far cry from those Southernplayalistic numbers.

A flow can be a gimmick. That’s why there is a distinction between 2 Chainz and Tity Boy. That’s why Old Dirty Bastard can’t be duplicated by anyone else and be taken seriously. Jeezy’s Adlibs and French Montana’s Haaan also count as a “gimmicks” or “schticks”. For all of you rappers that have used and abused Ace Hood, Meek Mill and Auto-tune in general as a style, flow and cadence; you are recreating a gimmick. Deal with it.

Some of you are reading and thinking “Man, whatever! I’m not a gimmick or a sell out. I’m  just doing me and I’m going to make it.” My question to you is, Do you really understand what it means to “make it” in the music business?

If gimmicks didn’t exist or had no place in hip-hop, why do we even care or understand what being fresh and fly is? If gimmicks aren’t needed to make it, then why did the word Swag get so overused? If gimmicks don’t thrive in hip-hop, then why are you buying the music that you are buying or even taking a chance on listening to the music?

SIDENOTE: Yes, being a backpacker is a gimmick. Why? Because you have generalized a group of people with an item. An item that you have signified with a demographic and a lifestyle. An item that can be purchased and used to define a group of people apart of hip-hop culture. It’s why Kanye West said he’s “The first Rapper with a Benz and a Backpack”…That was on College Dropout. An Album the masses deem a classic.

Rappers are salespeople. They sell you image, lifestyle and music. Yes, one of the greatest Rap Salesmen EVER, is Tupac Shakur. I lived the era, so let me speak on it. I know dozens of kids in Jr High and High School in my era, who went out and got “Thug Life” tatted on they stomach, rocked bald heads and emulated the image that was 2Pac. Do you think people would be getting “All Eyez On Me, Me Against The World, Only God Can Judge Me” and other famous Pac quotes and Song titles tattooed on them if he wasn’t a powerful image that people bought into? Some rappers live to impress the masses by saying “I got more songs than Pac had” That only matters because of the image of everything that embodied Pac. You’ll never hear a rapper boasting about “I got more songs than Master P” and Master P was hugely successful Rocking fatigue and representing “The Muthafawking Tank”. Once again, people choose the gimmicks they want to love and hate.

Why do you think it was so taboo to bite a rhyme or bite a style when the foundation of hip-hop culture was being built? This is why a lot go Golden Era OG’s don’t respect a lot of things going on right now and feel “their era is better than yours”.  Kane didn’t sound like Rakim who didn’t sound like RUN DMC. They wouldn’t even hop on the same style beats. Present Day, Drake and Migos put out “Versace” and a million and one aspiring emcees hop on the same track and  “Do the Versace Flow”. You don’t see yourself following a trend or cosigning a new gimmick?

A big portion of the hip-hop community treats “Gimmick” like the N-word in the 60’s. I don’t know the person who started the negative connotation of the word but, it’s not used correctly. There is nothing wrong with having a gimmick. If you can be you and do you and go to sleep at night, who on this earth can truly judge you? We all are not wired the same. Differences and quirks are what make life interesting and people special. No, gimmicks don’t equate to talent and success but, even Pepsi has failed one summer when trying to generate more sales.

I encourage everyone that is contributing and or supporting hip-hop to really sit and think. Think about what it is you love about hip-hop. Then tell me  by definition a gimmick doesn’t exist in it. DJ’s, breakers, b-boys and even taggers all have a gimmick. It’s  “That thing they do”, it’s the uniqueness and individuality that can’t be denied. A lot of you aspiring artist aren’t where you want to be in your careers and you’re mad at some of the “others that made it” because you’re either lying or just not interesting. Nobody wants to be you and some of you don’t even want to be yourselves. You’re not the first person to wear a white tee and talk about dope. You’re not the first person to challenge the system. You’re not the first to get high, wear dreads, work out and perform with your shirt off,  sing, dance, “experiment with different sounds”, not wear Jordan’s or only rock a certain brand. You’re not even the first rapper to not give a f**k. So what are you doing that’s so different? What is going to make you stand out to make people even want to listen to you? Content is king and this site is proof of that. Guaranteed if my audience hadn’t been showing consistent growth over the last 2 years you probably wouldn’t even be reading this now.

My gimmick is “BehindTheRhyme.com: Hip-Hop’s 60 Minutes”.

Follow up Question: How will you survive in the music business if you don’t have one?

SIDENOTE: Some of you worship Tony Montana in Scarface and that NEVER HAPPENED! He’s not in your history book or F.E.D.S Magazine. How can you tell me what’s real and not a gimmick when you want the lifestyle of a person who never really existed on earth?

2 thoughts on “Hip-Hop Is Full of Gimmicks; You Just Don’t Love All of Them”